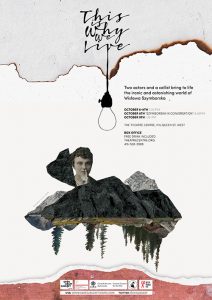 Combining poetry-theatre, live music, and collage; two actors and a musician journey through fragmented and visceral encounters with the world. Inspired by the poems and ironic collage work of Polish poet Wisława Szymborska, This is Why We Live is a kaleidoscope of characters; bringing the audience close to the poet’s state of astonishment. This is a unique international collaboration between Canadian company, Open Heart Surgery Theatre and Theatre de L’Enfumeraie (France); blending three languages, we delight in bringing our audience into a surreal performance that celebrates a great female voice of the 20th century. (theatrecentre.org)