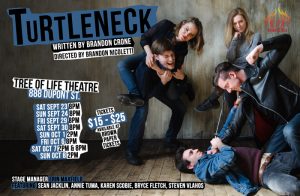 Sex, power struggles, and gender dynamics take center stage in Turtleneck, a play that focuses on Vicki, a woman trying to escape from a dark past that has come back to haunt her. In an attempt to distance herself from a destructive addiction, Vicki is befriended by a rehabilitation worker named Darcy. But by befriending Darcy, Vicki is accidentally introduced to Darcys sex-obsessed older brother, Brian, who develops an all consuming lust for Vicki. Thrown into the mix is Louis, a quirky and shy young man with a crush on Vicki, and Roy, a mysterious figure from Vickis dark past. Darcy, Brian, Louis, and Roy clash in an attempt to try and stake their claim over Vicki, resulting in a turbulent evening with devastating results. (Show Facebook Event)