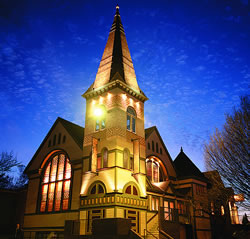 As a professional adult theatre company, we are dedicated to producing contemporary plays, with an emphasis on Canadian work, and to promoting artistic, cultural, and educational events in the Greater Victoria Region.

In the past 30 years the Belfry has produced 230 plays, including 158 Canadian plays, and more than 33 premieres. Many of those premiere productions have gone on to acclaim across Canada, in the U.S., Australia, Europe and London’s West End. Belfry productions regularly tour to other cities and have won awards in Toronto, Vancouver and Calgary.

The Belfry produces up to 12 plays per year: one or two summer productions, a four play Mainstage series, and SPARK, our mid-winter festival of innovative and alternative work from across Canada.

The Belfry’s mission is to produce theatre that generates ideas and dialogue, and that makes the audience see the world a little differently.