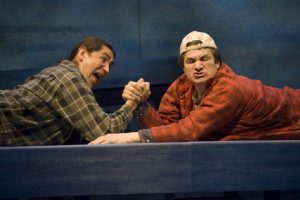 The Belfry Theatre Revival and The Savage Society and Vancouver Playhouse

Where the Blood Mixes is a play about survival and reconciliation, full of humour and shrewd observation, Loring’s play is as mythic as it is modern.

Where the Blood Mixes is the story of Floyd, a native man whose daughter was taken into care by social services two decades earlier. Now, as Floyd prepares for a reunion with his child, he must find a way to cope with his guilt – a guilt that is exacerbated by the country’s growing awareness of the abuse of First Nations children in the residential school system.  (wherethebloodmixes.blogspot.com)