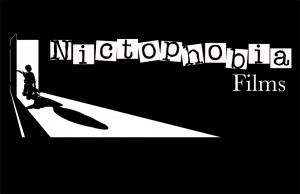 Nictophobia Films is owned and operated by Christopher Harrison and Phil Pattison.They quickly made a name for themselves by producing the short Stephen King film, The Man Who Loved Flowers. They then released Phil’s first feature film, Vs the Dead, a cult zombie film that continues to gain fans around the world. This October Nictophobia Films is releasing their second feature film, Devil’s Night, through Black Fawn Distribution. It is a slasher movie done in the same vein as the classics from the 70’s & 80’s, and stars Danielle Harris (Rob Zombie’s Halloween, Halloween 4) and Shawn Roberts (Diary of the Dead, Resident Evil: Afterlife). Nictophobia Films is presently creating George A. Romero’s Night of the Living Dead Live, a stage adaptation of the 1968 classic. The play is being directed by, Christopher Bond (The Evil Dead Musical) and executive produced by horror legends, George A. Romero, Russ Streiner and John A. Russo. The play hits the stage in spring 2013. With a reality TV show and another feature film, (The Mummers 2014) added to their project list, Nictophobia Films is sure to be a household name in the world of horror for years to come! (nictophobiafilms.com)