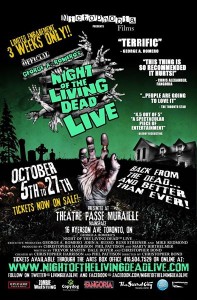 Night of the Living Dead Live is a fun and hilarious re-imagining of George A. Romero’s legendary classic. Set in 1968 and presented in all black and white, it literally feels like the film has been brought to life and placed on stage. The play lovingly examines the movie itself, the period in which it was made, and the film’s undying influence on the horror genre. (nightofthelivingdeadlive.com)