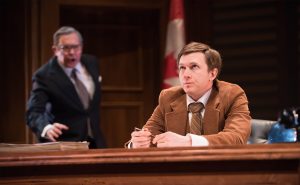 In June of 1979, at the age of just 39, Joe Clark was sworn in as Canada’s 16th prime minister. By Christmas, it was all over. 1979 is a new comedy by Michael Healey (Proud, The Drawer Boy) that looks at Clark and the pressure he was under in the dying days of his government. Everyone – friends, foes, family – has an opinion about what Joe should do. Should he stick to his principles, or bend to remain in control? A hilarious play about trust, power, and ambition, in which a dozen characters (Trudeau senior, Mulroney, Maureen McTeer, even a very young Stephen Harper) are played by a skilled company of three actors. (canadianstage.com)