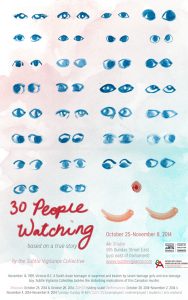 November 14, 1997, Victoria B.C. A South Asian teenager is swarmed and beaten by seven teenage girls and one teenage boy. A cigarette is burned into her forehead in the shape of a bindi. There are up to 30 witnesses. After the initial assault, a 16 year old boy and 15 year old girl take the victim under the Craigflower Bridge and commit a second fatal assault. A week later the body is found and arrests are made. Subtle Vigilance Collective tackles the disturbing implications of this Canadian murder. (blogto.com)