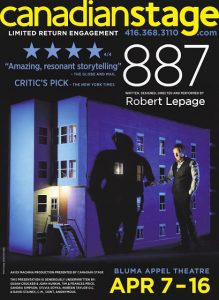 887 plunges audiences into the depths of the renowned director’s personal past: From his early years growing up in 1960s Quebec amidst the rise of the FLQ, Lepage constructs a life’s worth of stories, questioning the underlying mechanisms and relevance of certain memories. Why do we remember the phone number from our youth yet forget our current one? How does a childhood song withstand the test of time? Revealing the historical and social realities that shaped his own identity, and that of our country’s, 887 also invites us to reflect on the nature of personal and collective memory and the people and places that fade over time. (Show Press Release)