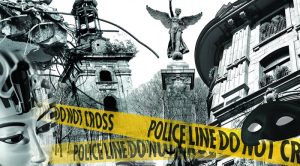 Presented as a gallery installation or tableaux vivant, A City is an intimate, personal study of four artists/friends, who tell the story of a famous friend who died under mysterious circumstances, and how he transformed them. The story is revealed through direct address in a disarmingly casual atmosphere, as if the audience were eavesdropping on a personal conversation.

Based on the members of a real indie theatre company in Montreal (Sidemart Theatrical Grocery), A City is inspired by documented stories, recorded text, confessional monologues and fictional writing. An intimate, painfully funny testament to a time and place, it is about the end of a friendship and a shifting world. (neccesaryangel.com)