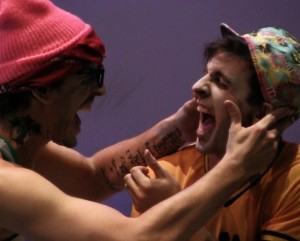 In 2004, Anthony Johnston and Nathan Schwartz, self-proclaimed “gay/straight best friends duo,” wrote a prank letter to a fundamentalist organization asking for funds to produce their play, Never Cry Wolfman: a Play with Mask and Song in which the Monster Within is Summarily Defeated. To their surprise, the letter was answered, and they were invited to workshop the piece at the group’s retreat in rural British Columbia—on the condition that they also spend two weeks participating in gay conversion therapy…

In 2014, still struggling to come to terms with what truly transpired, the friends reunite to perform their conflicting accounts as a piece of theatre. The result is A Quiet Sip of Coffee: part docu-theatre, atonement ritual, melodrama, exorcism, and half-mask musical. (summerworks.ca)