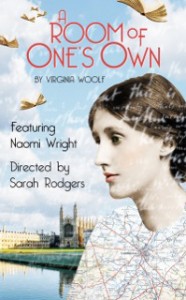 Campbell House and The Bloomsbury Collective

In 1928 and 1929 Virginia Woolf made two addresses – one to Girton College and one to Newnham College in Cambridge. Later she expanded her ideas into what would become an instant feminist classic: A Room of One’s Own.

A blend of true anecdotes and revealing fictions, it is a devastating account of the history of women writers.  By turns heartbreaking and hilarious it is a true masterpiece of the human spirit.

It was adapted for the stage by Patrick Garland in 1989.  (aroomofonesown.ca)