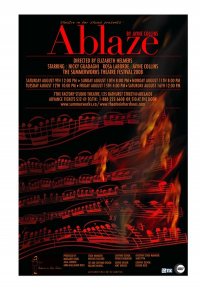 Theatre in Her Shoes

After years of separation, a forced reunion threatens to destroy the language they once shared.

Sisters Anna and Ellen grew up playing violin together in St. John’s, Newfoundland. Raised on an overdose of their grandmother’s love for all things music, the girls had solid plans to make a career of performing together. All of this was shattered when Anna decided to leave to play for the prestigious Boston Symphony Orchestra, while Ellen chose to stay home to care for their grandmother, and play with the Newfoundland Symphony Orchestra. Ablaze opens with Anna’s long awaited return as their grandmother, their only family, is now dying of cancer. Ideals clash and tensions rise as the three women attempt to salvage the bonds that once felt so sure. (Show Facebook Event)