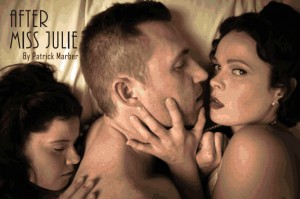 a Version of Strindberg’s Miss Julie by Patrick Marber.

England, July 1945. The Labour Party sweeps to a landslide election victory. Celebrations flood into the streets. Miss Julie descends into the servants’ kitchen of her father’s country estate seeking John, the chauffeur. Over one tragic summer’s night, Julie and John take their passionate entanglement to the edge.

In this provocative adaptation, Marber amps up the power play between Julie, John, and his fiancée Christine to a deliciously dangerous level.