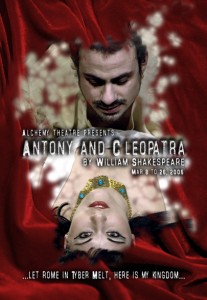 The tempestuous affair of Marc Antony of Rome and Cleopatra of Egypt is a legend which has endured for two thousand years.

Coming in the aftermath of the assassination of Julius Caesar their affair was fraught with danger, yet Marc Antony’s passion for Cleopatra was such that he abandoned his responsibilities in Rome and betrayed the confidence of Octavius Caesar.

The war that followed lead to the crushing defeat of Eqypt and to the eventual anguished suicides of Anthony and Cleopatra. (alchemytoronto.com)