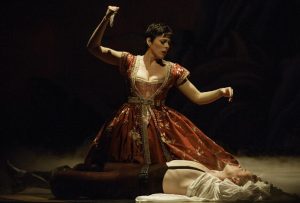 Masterpiece of the 17th century, Armide, is a tragedy in 5 acts that illustrates the clash of Christian and Islamic worlds through the story of the invincible knight Renaud and the Muslim war-princess Armide. Obsession, jealousy and magic form the pillars of this tragic love story. Armide is a psychological drama. Despite her virginity, Armide elicits a powerful fascination from men, eliminating their every instinct of aggression and evoking in them an irresistible sensual desire. Armide is safe from harm, since she has never known the pleasures of the flesh. Renaud’s own virginity is exemplary of his iron will that makes him immune to Armide’s charms. (toronto.consulfrance.org)