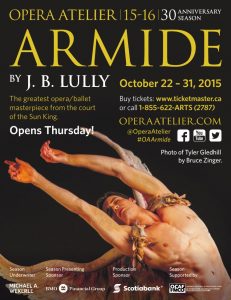 The action concerns the Muslim Warrior Princess Armide and the Christian Knight Renaud. Although a virgin, Armide’s greatest power lies in her sexual allure, which reduces men to a state of hopeless submission. Armide herself is protected by the fact that she herself has never experienced desire. Renaud also draws his strength from an almost mystic virginity which renders him impervious to Armide’s allure. (operaatelier.com)