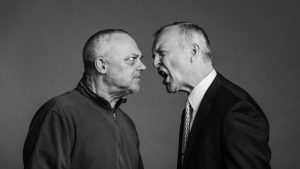 In an office building in Fort McMurray, a senior public relations executive for a major Canadian oil company is confronted by a journalist turned environmental activist, who is violently determined to shut down the Athabasca oil sands. Next Stage’s first-ever site-specific production is an uncompromising battle of wills that poses the question – how far are you willing to go to save our planet? (fringetoronto.com)