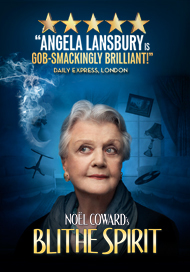 Researching for his new novel, Charles Condomine invites the implausible medium Madame Arcati to his house for a séance. While consumed in a trance, Madame Arcati unwittingly summons the ghost of Charles’ dead wife Elvira. Appearing only to Charles, Elvira soon makes a play to reclaim her husband, much to the chagrin of Charles’ new wife Ruth. Now if he wants his latest marriage to stand a GHOST of a chance, he’d better conjure up a solution quickly. One husband, two feuding wives and a whisper of mischief in the air – who will win in Coward’s unworldly comedy? (mirvish.com)