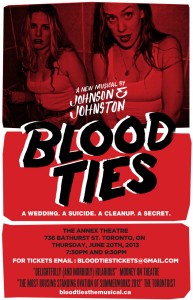 BLOOD TIES is a musical by Johnson and Johnston based on a true story about a bachelorette weekend gone horribly wrong. Sheila’s uncle kills himself on the eve of her wedding and she and three best friends are left with the task of cleaning up the mess left behind – a mess that is soon revealed to extend far beyond the blood splattered on the floor. (bloodtiesthemusical.ca)