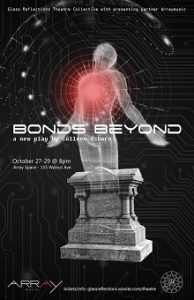 This dystopian play is set at Pinnacle Corporation, where the dead don’t die and the bereaved don’t grieve –instead, they aspire to invest in a beta version of a digital afterlife called Summit™. “Your consciousness is a precious commodity.” Tom is the son of the first person to beat death through Summit™; he wants to break free from living in his mother’s shadow. But what options does he have other than spiritual entitlement? (glassreflections.wixsite.com)