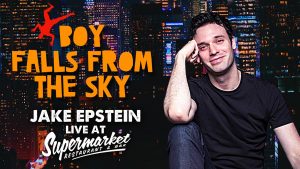 Boy Falls From The Sky: Jake Epstein Live at Supermarket (2019)

He’s been “that guy from Degrassi”, then starred on Broadway in Beautiful and as Spider-Man. Not bad for a kid who dreamed about performing on Broadway in the backseat of his parents’ minivan on their annual family road-trip to NYC. But the thing about dreams is, they don’t always go as planned. Through a series of funny and revealing stories and songs, from touring the US, to enduring steroid shots and Broadway Boos, Epstein shares the rejection, stage fright and heartbreak behind a seemingly successful career in this showbiz tell-all. For anyone who’s ever tried to go after their dreams. (fringetoronto.com)