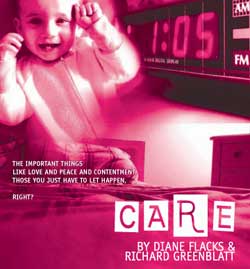 “The important things like love and peace and contentment, those you just have to let happen, right?”

Steve and Ellie are a modern day couple sandwiched between a temperamental baby, high-pressure jobs and an ailing parent in a nursing home. Caught between other people’s needs and their own, this touching and comic story looks at two people trying to find their way back to each other, pulled apart by care. (tarragontheatre.com)