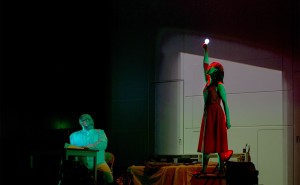 As tanks roll through Tiananmen Square, crushing the student movement’s cries for democracy, a young photojournalist from America captures on film a moment of defiance that comes to symbolize the struggle. More than twenty years later, a mysterious note appears in a Beijing newspaper and the now middle-aged journalist is driven to discover the truth about that fateful day, and the secrets that were buried as the world looked on. Lucy Kirkwood’s play examines the changing fortunes of two countries, their tied fates, and the fates of all caught in between. (canadianstage.com)