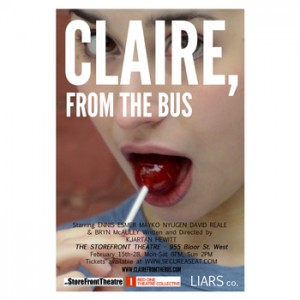 Ralph (Esmer) is turning 31, today in fact, and he’s looking forward to his usual meeting of friend’s, including his delightfully amoral best friend Donald (Reale), at his usual bar for a nice, usual birthday. Then, on his commute home, he meets Claire (McAuley). The next 24 hours find Ralph in a devilishly orchestrated game of sexual blackmail calling into question his grasp of morality, his fidelity and that of his girlfriend, Lemmy (Nguyen). It will especially have him questioning. (clairefromthebus.com)