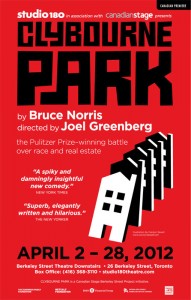 In this hilariously unsettling comedy – inspired by Lorraine Hansberry’s 1959 play A Raisin in the Sun – a battle over race and real estate rages across two generations in a suburban Chicago neighbourhood. With a modern twist on issues of race, class, property ownership and community, Clybourne Park offers a satirical look at demographics, history, home and heart. (studio180theatre.com)