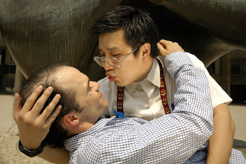 Conservatives in Love is a study of two things: those mysterious new urbanites who are moving into all those towering downtown condos. And the non-economic value of Art. The play is mostly set at the Art Gallery of Ontario. It brings together ten young downtowners who are converging for a Young Conservatives meet and greet. At this meeting, they will learn the exact value of a Henry Moore, and they will spend an indecent amount of time hitting on each other. (Because that is what Young Conservatives do.) (peagreentheatre.com)