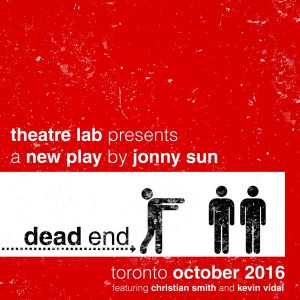 What is there left to do when you have one bullet, one granola bar, and one zombie blocking the only exit? That’s the dilemma facing these two survivors of the zombie apocalypse. Having narrowly escaped certain death, it appears their luck has finally run out. With the zombie slowly nearing, they contemplate survival, fear, humanness, and their relationship with each other. Suspenseful and darkly comedic, DEAD END follows in the tradition of playwrights such as Martin McDonagh and David Ives, and is unique in its use of narrow staging and single setting to convey the feeling of claustrophobia and impending doom. (factorytheatre.ca)