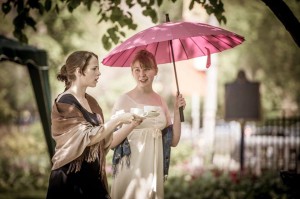 The City of Toronto and Campbell House

An adaptation of Pride and Prejudice.

Hallie Burt and Kate Werneburg first presented a site-specific, two-woman adaptation of Pride and Prejudice called Elizabeth – Darcy at historic Campbell House as part of Toronto Fringe 2013. Catching the eye of the public and the critics, this piece received a “NNNN” rating from NOW magazine, garnering mentions from the same publication for Outstanding Ensemble and Outstanding Direction.

This piece will receive its first professional production December 14-29, 2013. Campbell House will once again provide a stunning period backdrop for this classic comedy.