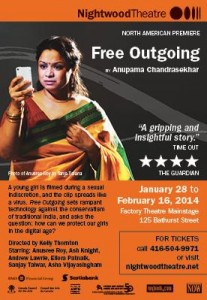 One message is all it took. When a young girl is filmed during a sexual indiscretion, the video clip spreads like a virus infecting her community and then the entire country with a burning moral outrage. Free Outgoing sets the rampant technology of the modern world against the conservatism of traditional India, and asks the universal question, how can we protect our girls in the digital age? (nightwoodtheatre.net)