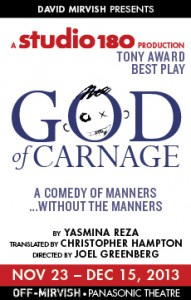 Benjamin and Henry have had a fight.
Their parents are meeting for a civil discussion of the incident.
At least that’s the plan.

Tensions flare, and the gloves come off in this hilarious, Tony award–winning comedy that strikes at the heart of bourgeois civility and reveals the savagery beneath polite society’s polished facade.

Studio 180 is proud to present this internationally acclaimed comedy at the Panasonic Theatre, as part of Mirvish Productions’ 50th Anniversary season (OFF-MIRVISH: The Second Stage Series).