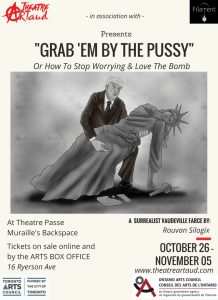 A Surrealist Vaudeville Farce. Drawing from Thus Spoke Zarathustra by Nietzsche, the piece revolves around examining the rising Populism / Fascism in the world, and trying to make sense of Brexit / Donald Trumpian figures and beliefs; all told with the pomp and bang of circus feats and political comedy. The show touches on similar historical fascist movements and asks its audience to reconsider the ‘WHYS’ in the current global political landscape. Do such movements start “out there”, or do they start “right here, with you and me”? The show questions whether the return-to-mainstream of the KKK & Neo-Nazis is merely a freak occurrence, or whether we really should be worrying about the Bomb. (theatreartaud.com)