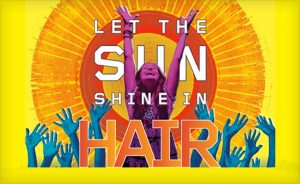 Set in an East Village park in 1967, Hair is the musical story of a group of hippies who celebrate peace and love in the shadow of the Vietnam War. The loose plotline centers on Berger, the charismatic leader of the “tribe,” and Claude, a sweet-natured guy from Queens who’s about to be drafted. Other memorable characters include Berger’s war protester girlfriend Sheila, lovable flower child Crissy, Mick Jagger fan Woof, Claude’s straight-laced parents and many more. (Broadway.com)