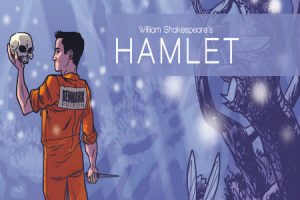 Young Hamlet’s world is turned upside down when, after the death of his father, his mother quickly marries Hamlet’s uncle Claudius. When the ghost of Hamlet’s father appears before him to accuse Claudius of murder, Hamlet is set upon a course of action which will have significant consequences for everyone that he holds dear. Hamlet is gripping tragedy fueled by grief and framed by a world dominated by the politics of fear. (driftwoodtheatre.com)