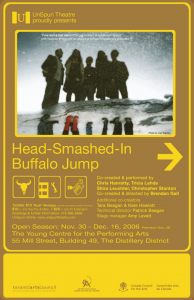 For reasons beyond her control, Thea has been exiled from the world outside her Parkdale apartment. She’s got a bed. She’s got a window. And she’s got a plan. Using the unique talents of her unlikely cohorts, Bear and Andrea, Thea endeavours to create “a world worth living in.” Meanwhile, in the neighbourhood pawnshop, Dusan is archiving memories as quickly as he can appropriate them – using every spare moment to spin bizarre, darkly funny tales into his faithful security camera. (unspuntheate.com)