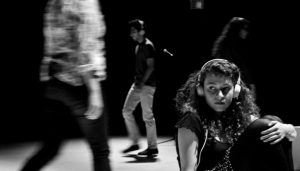 A white space. A flood of light. Three students create a show based on who they are, what they know, what they like, what they’re scared of. Conceived by Anne- Marie Ouellet and Thomas Sinou, Impatience combines theatrical performance with soundscape. On stage: three Toronto teens, two professional actors. They spontaneously create something new with each performance that finds meaning in its immediacy. They question the commonalities that unite them. The show changes with the cities visited and the young people who partake in a game turned performance. Featured as part of the Québec programming at Maison Folie in Mons, Belgium, the 2015 European Capital of Culture, this concept invites adults to revisit their adolescence and invites young people, to look to the future. Performers reveal themselves through funny and surprising stories. It’s not all true, but the line between fiction and reality are deliberately blurred. This touching and spontaneous work sheds light on what we dream versus what we live. (theatrefrancais.com)