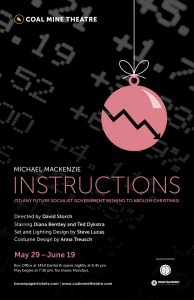 Instructions (To Any Future Socialist Government Wish to Abolish Christmas) (2016)

Set in 2008 against the panic-stricken backdrop of the U.S. financial collapse, a ruthless hedge fund manager in the midst of market chaos, gets a surprise visit from his brilliant yet troubled assistant who has just returned from an enforced sabbatical. Their intense interactions swing between humorous and tender to crude and cunning as they examine the financial mess and interrogate each other about their work and motives.

Equal parts thriller and Greek tragedy, emotions, numbers and words collide in a frantic yet controlled rhythm made all the more dramatic by Mackenzie’s breathtaking use of language and his perceptive take on the global economy. (coalminetheatre.com)