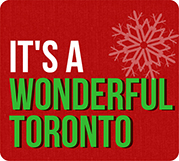 It’s the dress rehearsal of The Rob Ford Christmas Special titled, It’s a Wonderful Toronto: The Rob Ford Holiday Spectacular!  and Mayor Ford is  having doubts about the material.  He thinks the various sketches and songs that he’s been given show him in a negative light. Which begs the question: There’s a positive light? When Ford becomes convinced that the show is not only going to tank but smear his political career, he threatens to jump from the balcony of the theatre and end it all. (passemuraille.on.ca)