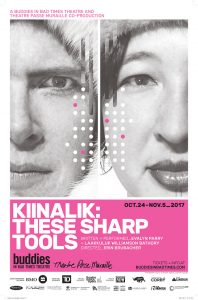 A concert and a conversation, Kiinalik: These Sharp Tools is the meeting place of two people, and the North and South of our country. Inuk artist Laakkuluk Williamson Bathory and queer theatre-maker Evalyn Parry met on an Arctic expedition from Iqaluit to Greenland. Now sharing a stage, these two powerful storytellers map new territory together in a work that gives voice and body to the histories, culture, and climate we’ve inherited, and asks how we reckon with these sharp tools.

In the Inuktitut language, when a knife is dull, it is said to “have no face”. The word “Kiinalik” translates to mean the knife is sharp – or, “it has a face”. Embodying the stories of their heritage, Evalyn and Laakkuluk put a face to the colonial histories, power structures and the changing climate that lie between them. (buddiesinbadtimes.com)