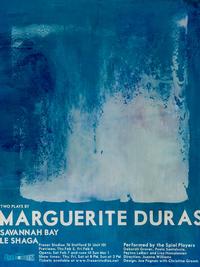 Performed as part of a double-bill with Savannah Bay

In Le Shaga we find three outcasts and one encounter. Two of the outcasts speak English while one speaks Shaga – a made-up language that nobody knows. They talk some, and they talk some more, and talk incessantly for an hour, desperately seeking common ground. Take the journey into a no man’s land where the boundaries of language and nonsense are mixed into a high energy, corrosive cocktail. (Show Press Release)