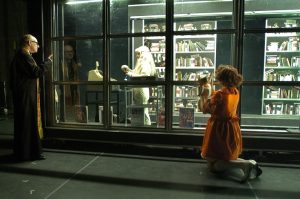 From its most primitive expression; a baby’s cry – to its most sophisticated; opera singing – the human voice is a select locus of identity and emotion. Lipsynch explores its many manifestations, declensions and implications through different procedures that convey and reproduce it.

As in The Dragon Trilogy and The Seven Branches of the Ota River, the singularity of individual destinies is superimposed on the magnitude of collective history, forming a gigantic modern fresco in the image of our modern world, fragmented and plural, burlesque and tragic, and layered with multiple languages, sounds and meanings. (lacaserne.net)