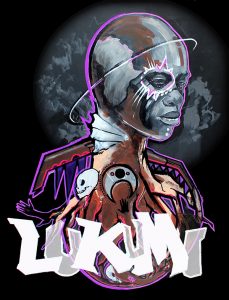 Lukumi is an Afro-futurist Dub-Opera set in post-apocalypse Turtle Island in 2167, 150 years after WWIII and 100 years after the Period of Explosions (PoE). The PoE saw the widespread meltdown of nuclear power plants – due to global environmental degradation – making the surface of the earth virtually uninhabitable. A group of freedom fighters called the Ohosi Mino live
underground in intricate cave systems where they are viciously hunted by The One World Army. Having access to ancient knowledges, the Ahosi Mino must send a Lukumi on a vision quest, descending through eight layers of earth, to find humanity’s redemption or to die trying. (tarragontheatre.com)