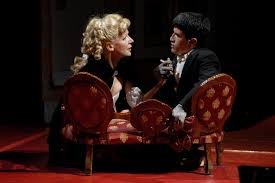 Adapted from A Doll House by Henrik Ibsen.

Nora comes home with a Christmas present. It is a dollhouse so large that the children can play inside. All the period furniture, the crockery, the knick-knacks are the right size for the children, Emmy and Ivar, who are hardly more than three feet tall.

Enter Torvald, Rank, and Krogstad – We find that the men are the same size as the children. Is this dollhouse the world of patriarchy, the world in which a woman never fits?

Here Ibsen’s feminism is metaphorically rendered as a parable of scale. The dollhouse is a man’s world and only doll-like women, who allow their men to feel grand, can hope to live in it. Even the cod-Norwegian accents are miniaturized; like the accents in Disney’s “It’s A Small World”. Nothing here is real except the pain. Both Torvald and Nora are trapped in a meta-narrative, playing out an illusion of male power. Both pay the price: the death of love. (maboumines.org)