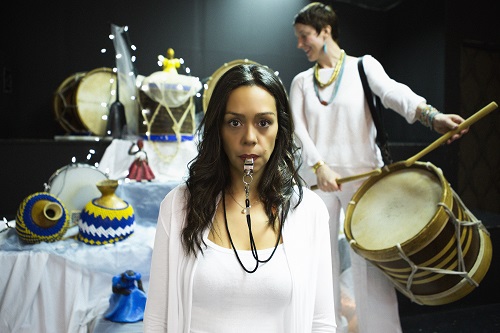 Co-created by the Ensemble

From the streets to the stage and back again. From the Northeast of Brazil to Queen St. West in Toronto. From outsider to insider. From folklore to future. From slave nation, to coronation, to liberation!

Led by Juno-nominated singer-songwriter Aline Morales and created by critically acclaimed actor Suzanne Roberts Smith (NOW’s 2013 Fringe Outstanding Performance & Production, Offensive to Some), this multi-disciplinary piece showcases the sounds of Maracatu and illuminates the integrity of its musical migration journey by honouring both its Afro-Brazilian roots and the contemporary narratives of the people playing it in Toronto today. MARACATU YOU! is an investigation in displacement, replacement, and finding ‘home’ in the most unlikely of places. As Maracatu reincarnates in our own streets, its essence remains to uplift, transform and unite. It is a celebration in the face of oppression.  (summerworks.ca)