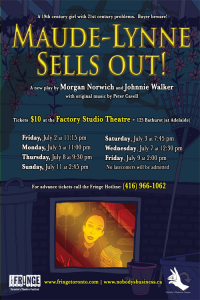 Our heroine Maude-Lynne is a 21st century girl with a 19th century attitude. And a cash flow problem. You’re invited to the basement of her mom’s house as she sells off her collection of Rare Items and Victorian Literature. A play about love, real estate, and Emily Bronte, featuring a real live auction and the disembodied voice of Cary Grant. (fringetoronto.com)