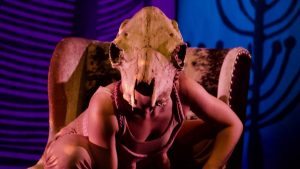 It begins at dusk. A vachette describes her mother as she removes the shackles of the day and society, transforming herself into a sensual, grotesque, night cow. She opens herself in two, she splits herself in four, expanding into the milky way; her daughter riding her back as they go to wake the crows.

Night Cows is a solo show by Quebecois Queer Indigenous artist Jovette Marchessault. MoonCow Theatre Co. has developed a fantastical interpretation that blurs the line between human and animal, mother and daughter, sky and earth, inviting audiences into the milky ecstasy of liberation. (fringetoronto.com)