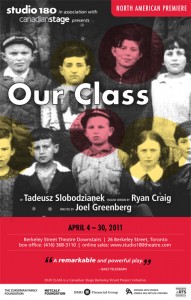 In 1925 Poland, a group of Jewish and Catholic schoolchildren declare their ambitions: to be a fireman, a film star, a doctor. As the children grow up their country is torn apart by invading armies, and internal grievances deepen as fervent nationalism develops. The tension escalates into violence as these ordinary people carry out an extraordinary and monstrous act.

Our Class explores the events leading up to a dark moment in history and follows the fortunes of ten one-time classmates from one century into the next. This haunting play is a courageous examination of loyalty and treason, individual bravery and collective cowardice and the actions that ripped apart a small community during the Second World War. (studio180theatre.com)