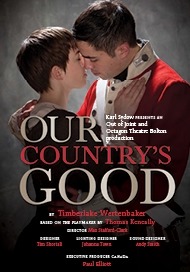 Octagon Theatre Bolton and Out of Joint Theatre Company

These days, vacationers flock to Australia for the outback, the Great Barrier Reef, and, of course, kangaroos. But back in 1788, the only people travelling Down Under were the thieves, murderers, and prostitutes exiled from Britain. Our Country’s Good tells the story of some eager convicts who decide to make the best of their situation by putting on a play, unintentionally humanizing themselves in the eyes of their captors. (torontoist.com)