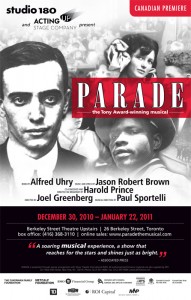 In 1913 Atlanta, Georgia, a teenage factory employee is raped and murdered. Leo Frank, the young Jewish manager of the factory, is charged with the crime. By manipulating witnesses and tampering with evidence, the prosecution convinces the jury that Frank is guilty. Considered one of the most sensational trials of the early 20th century, the Frank case touched on every hot-button issue of the time: North vs. South, black vs. white, Jewish vs. Christian, industrial vs. agrarian. The musical recounts the press frenzy and public outrage surrounding Frank’s trial and conviction, including his crusade for justice amid religious intolerance, political interference and racial tension. (studio180theatre.com)