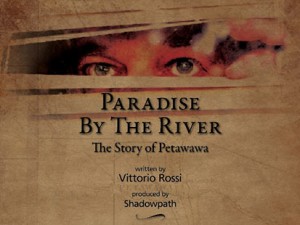 Shadowpath Theatre presents the timely Toronto premiere of Paradise by the River by Vittorio Rossi. On June 10, 1940, Prime Minister Mackenzie King broadcasted his decision to intern hundreds of Italian-Canadians. King used a section of the War Measures Act that allowed the government to take “necessary precautions to safeguard the country from internal aliens.” Paradise by the River tells their story.

Paradise by the River is the journey of an Italian immigrant, Romano, and his forced relocation and internment to Petawawa, Ontario. This year marks the 70th anniversary of the Italian Internment in Canada. Artistic Producer Alex Karolyi comments, “Many people never knew about this event, but the internment is an important part of our history as Canadians.” Paradise by the River is just the right play to educate, stimulate and enlighten.

Paradise by the River is an unsentimental, honest journey with the Italian-Canadian community during WWII. It doesn’t preach, nor postulate, but rather recalls the horrors of the past and reminds us that— je me souviens. (facebook.com)